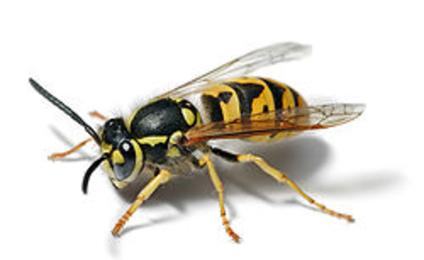 Yellowjacket is the common name in North America for predatory wasps of the genera Vespula and Dolichovespula. Members of these genera are known simply as "wasps" in other English-speaking countries. Most of these are black and yellow; some are black and white (such as the bald-faced hornet, Dolichovespula maculata), while others may have the abdomen background color red instead of black. They can be identified by their distinctive markings, small size (similar to a honey bee), their occurrence only in colonies, and a characteristic, rapid, side to side flight pattern prior to landing. All females are capable of stinging which can cause pain to the person who has been stung. Yellowjackets are important predators of pest insects.

Yellowjackets are social hunters living in colonies containing workers, queens, and males. Colonies are annual with only inseminated queens overwintering. Fertilized queens occur in protected places such as hollow logs, in stumps, under bark, in leaf litter, in soil cavities, and human-made structures. Queens emerge during the warm days of late spring or early summer, select a nest site, and build a small paper nest in which eggs are laid. After eggs hatch from the 30 to 50 brood cells, the queen feeds the young larvae for about 18 to 20 days. After that, the workers in the colony will take over caring for the larvae, feeding them with chewed up food, meat or fruit. This act is called trophallaxis. Larvae pupate, emerging later as small, infertile females called workers. By mid-summer, the first adult workers emerge and assume the tasks of nest expansion, foraging for food, care of the queen and larvae, and colony defense.

From this time until her death in the autumn, the queen remains inside the nest, laying eggs. The colony then expands rapidly, reaching a maximum size of 4,000 and 5,000[2] workers and a nest of 10,000 and 15,000 cells in late summer. At peak size, reproductive cells are built with new males and queens produced. Adult reproductives remain in the nest fed by the workers. New queens build up fat reserves to overwinter. Adult reproductives leave the parent colony to mate. After mating, males quickly die, while fertilized queens seek protected places to overwinter. Parent colony workers dwindle, usually leaving the nest to die, as does the foundress queen. Abandoned nests rapidly decompose and disintegrate during the winter. They can persist as long as they are kept dry, but are rarely used again. In the spring, the cycle is repeated (weather in the spring is the most important factor in colony establishment). Although adults feed primarily on items rich in sugars and carbohydrates (fruits, flower nectar, and tree sap), the larvae feed on proteins (insects, meats, fish, etc.). Adult workers chew and condition the meat fed to the larvae. Larvae in return secrete a sugar material relished by the adults. This exchange is known as trophallaxis. In late summer, foraging workers change their food preference from meats to ripe, decaying fruits or scavenge human garbage, sodas, picnics, etc., since larvae in the nest fail to meet requirements as a source of sugar. This is why yellowjackets are known largely as an unwelcome nuisance at picnics. Although they lack the pollen-carrying structures of bees, yellowjackets can be minor pollinators when visiting flowers.