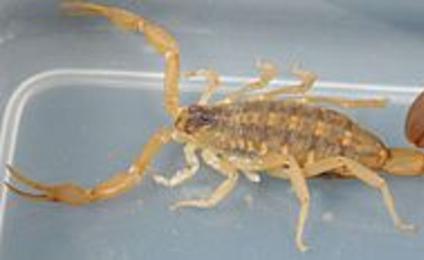 The striped bark scorpion (Centruroides vittatus) is an extremely common scorpion found throughout the midsection of the United States and northern Mexico; indeed, it is perhaps the most frequently encountered scorpion in the U.S.

A medium-sized scorpion that is rarely longer than 70 mm (up to around 7 cm), it is easily identified by two dark, longitudinal stripes on its carapace, with a dark triangular mark on its head. There are minor variations on this theme, however; specimens that are lighter-colored and lack the characteristic stripes have been described as separate species in the past.

Like many scorpions, C. vittatus is primarily a nocturnal insectivore. They are highly adaptable, and can be found almost anywhere with plenty of crevices in which to hide or hunt; these include forests, rocky areas, and buildings, where they can be a frequent indoor pest. The species does well in captivity.

Noted for their complex courtship behavior, their long breeding season runs from autumn through early summer; after an eight-month gestation, they give live birth to a brood of as many as 50 young.

Though not aggressive, the scorpion's close association with humans makes envenomation relatively common. The sting can be extremely painful. For some, the worst passes in 15-20 minutes, but not uncommon to remain very painful with numbing sensations for 2-3 days. Fatalities are rare, and due to anaphylactic shock rather than the venom itself. Reported direct deaths are controversial. Sting victim should contact poison control.