A packrat, also called a wood rat, can be any of the species in the rodent genus Neotoma. pack rats have a rat-like appearance, with long tails, large ears and large black eyes. Compared to deer mice, harvest mice, and grasshopper mice pack rats are noticeably larger and are usually somewhat larger than cotton rats.

A common accepted spelling of "packrat" includes "pack rat". However, according to the American Society of Mammalogists, "packrat" is the official correct spelling.

Each species of pack rat is generally restricted to a given type of habitat within its range. pack rats live anywhere from low, hot, dry deserts to cold, rocky slopes above timberline. pack rats build complex houses or dens made of twigs, cactus joints and other materials. These contain several nest chambers, food caches as well as debris piles. Dens are often built in small caves or rocky crevices, but when close by human habitations, wood rats will opportunistically move into the attics and walls of houses. Some Neotoma species, such as the White-throated wood rat (N. albigula), use the base of a prickly pear or cholla cactus as the site for their home, utilizing the cactus' spines for protection from predators. Others, like the Desert wood rat (N. lepida) will build dens around the base of a yucca or cactus, such as Jumping and Teddy-bear Chollas. The largest species, Neotoma cinerea, has a bushy, almost squirrel-like tail. Bushy-tailed wood rats Neotoma cinerea occupy a range of habitats from boreal woodlands to deserts. They are cliff-dwellers, and are often found on isolated, high-elevation bouldery exposures under a variety of temperature and moisture regimes. They require adequate shelter inside the rocks, though they are occasionally found inhabiting abandoned buildings as well. 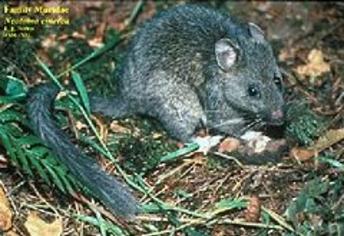