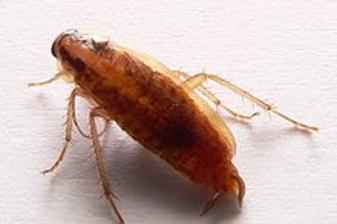 The German cockroach (Blattella germanica) is a small species of cockroach, measuring about 1.3 cm (0.51 in) to 1.6 cm (0.63 in) long; however, they are known to get bigger. It can be tan through brown to almost black, and has two dark parallel streaks running from the head to the base of the wings. Although it has wings, it is unable to sustain flight. The German cockroach is one of the most common and prominent household cockroaches in the world, and can be found throughout many human settlements. These insects are particularly associated with restaurants, food processing facilities, hotels, and nursing homes. In colder climates, they are found only near human habitats, since they are not very tolerant to cold. However German cockroaches have been found as far north as Alert, Nunavut. The German cockroach is originally from Africa, it is very closely related to the Asian cockroach, and to the casual observer they appear nearly identical and may be mistaken for the other. This cockroach can be seen in the day occasionally, especially if there is a large population or if they have been disturbed. However, sightings are most commonly reported in the evening hours as they are most active at night. This type of cockroach can emit an unpleasant odor when excited or frightened.

The German cockroach is very successful at establishing an ecological niche in buildings, and is very hardy and resilient against attempts at pest control. This is because of the large number of nymphs produced from each egg case, the short period between birth and sexual maturity, and their ability to easily hide due to their small size. The mother also carries the egg case (called an ootheca) with her during the germination period, rather than depositing it like other species, a practice which would leave them vulnerable in a human habitat to zealous attempts to wipe them out. This cockroach is also smaller than many other species so it can more easily hide and fit into very small cracks and crevices to evade humans. That is also the main reason they can most effectively be controlled with bait in cracks and crevices near harborages. These type of pest control methods should kill 95% of the overall population in a property due to their fast reproductive cycles. The German cockroach, discounting the presence of pets, has few natural predators inside a human habitat. The German cockroach's thigmotactic nature compounds the difficulty of pest control treatment. The immature cockroaches will live off excretions and moults from the adult cockroaches and thus can remain hidden away from most surface treatments.