The bodies of fire ants, like all insects' bodies, are divided into three sections: the head, the thorax, and the abdomen, with three pairs of legs and a pair of antennae. Fire ants can be distinguished from other ants by their copper brown head and body with a darker abdomen. The worker ants are blackish to reddish, and their size varies from 2mm to 6 mm (0.12 in to 0.24 in). These different sizes of the ants can all exist in the same nest.

Solenopsis sp. ants can be identified with three body features — a pedicel with two nodes, an unarmed propodeum, and antennae with 10 segments and a two segmented club

A typical fire ant colony produces large mounds in open areas, and feeds mostly on young plants, seeds, and sometimes crickets. Fire ants often attack small animals and can kill them. Unlike many other ants, which bite and then spray acid on the wound, fire ants bite only to get a grip and then sting (from the abdomen) and inject a toxic alkaloid venom called solenopsin, a compound from the class of piperidines. For humans, this is a painful sting, a sensation similar to what one feels when burned by fire—hence the name fire ant—and the after effects of the sting can be deadly to sensitive individuals. The venom is both insecticidal and antibiotic. Researchers have proposed that ant nurse workers will spray their brood to protect them from microorganisms.

Fire ants nest in the soil, often near moist areas, such as river banks, pond edges, watered lawns and highway edges. Usually the nest will not be visible as it will be built under objects such as timber, logs, rocks, paver's, bricks, etc. If there is no cover for nesting, dome-shaped mounds will be constructed, but this is usually only found in open spaces such as fields, parks and lawns. These mounds can reach heights of 40 cm (15.7 in). The mounds that the fire ants live in can also be as deep as five feet.

Colonies are founded by small groups of queens or single queens. Even if only one queen survives, within a month or so the colony can expand to thousands of individuals. Some colonies may be polygynous (having multiple queens per nest) 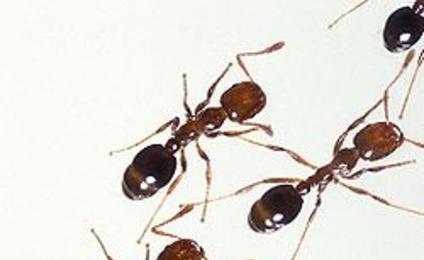