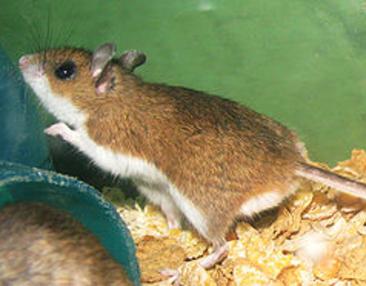 Peromyscus maniculatus is a rodent native to North America. It is most commonly called the Deer Mouse, although that name is common to most species of Peromyscus and is fairly widespread across the continent, with the major exception being the southeast United States and the far north.
Like other Peromyscus species, it is a carrier of emerging diseases such as hantaviruses and lyme disease.
It is closely related to Peromyscus leucopus, the White-footed Mouse.

The scientific name for a deer mouse is Peromyscus maniculatus. The species has 66 subspecies. They are all tiny mammals that are plentiful in number. The deer mouse is described as a small rodent that lives in the Americas and is closely related to the white-footed mouse, Peromyscus leucopus. Because the two species are extremely similar in appearance, they are best distinguished through red blood cell agglutination tests or karyotype techniques. The deer mouse can also be distinguished physically by its long and multicolored tail. Deer mice are very often used for laboratory experimentation due to their self cleanliness and easy care.

Deer mice are nocturnal creatures who spend the day time in areas such as trees or burrows where they have nests made of plant material. The individual litters of deer mice are contained by the female mother in an individual home range. The deer mice do not mingle in groups with their litters. During the development stages, the mice within one litter interact much more than mice of two different litters. Although deer mice live in individual home ranges, these ranges do tend to overlap. When overlapping occurs, it is more likely to be with opposite sexes rather than with the same sex. Deer mice that live within overlapping home ranges tend to recognize one another and interact a lot.