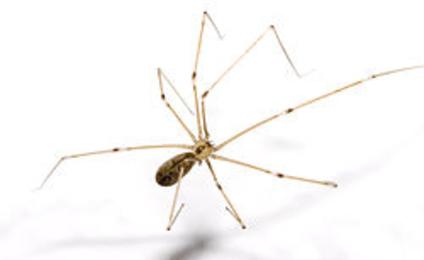 Pholcids are fragile spiders, the body being 2–10 mm in length with legs which may be up to 50 mm long. Pholcus and Smeringopus have cylindrical abdomens and the eyes are arranged in two lateral groups of three and two smaller median contiguous eyes. Eight and six eyes both occur in this family. Spermophora has a small globose abdomen and its eyes are arranged in two groups of three and no median eyes. Pholcids are gray to brown with banding or chevron markings. The shape of the Pholcus and Smeringopus's body resembles that of a peanut shell.

Pholcids are web-weaving spiders and are distributed worldwide. They hang inverted in messy, irregular, tangled webs. These webs are constructed in dark and damp recesses, in caves, under rocks and loose bark, abandoned mammal burrows in undisturbed areas in buildings and cellars, hence the common name "cellar spiders". However, Pholcids are also quite commonly found in warm, dry places, such as household windows and attics.