Solifugae is an order of Arachnida, known as camel spiders, wind scorpions or sun spiders, comprising more than 1,000 described species in about 153 genera. They may grow to a length of 19 cm (7.5 in), and have a body comprising an opisthosoma (abdomen) and a prosoma (head) with conspicuously large chelicerae, which are also used for stridulation. Most species live in deserts and feed opportunistically on ground-dwelling arthropods and other animals. A number of urban legends exaggerate the size and speed of Solifugae, and their potential danger to humans.

Solifugids are moderate to large arachnids, with the larger species reaching 19 centimeters (7.5 in) in length. The body is divided into a forward part, cephalothorax or prosoma, and a ten-segmented abdomen or opisthosoma. The prosoma comprises the head, mouth parts and somites containing the pedipalps. It is divided into a relatively large anterior carapace, including the animal's eyes, and a smaller posterior section.

The most distinctive feature of Solifugae is their large chelicerae, which are longer than the prosoma. Each of the two chelicerae are composed of two articles forming a powerful pincer; each article bears a variable number of teeth.

While solifuges appear to have ten legs, they have eight legs like other arachnids; the first set of appendages are pedipalps, which function as sense organs similar to insects' antennae and give the appearance of an extra pair of legs. The pedipalps terminate in eversible adhesive organs, which are used to capture flying prey, and for climbing. They stridulate with their chelicerae, resulting in a rattling noise.

Of the four pairs of legs, the first pair are smaller in size, and act as accessory tactile organs used to feel the animal's surroundings, so that only the other six legs are used for running. On the last pair of legs, Solifugae have fan-shaped sensory organs called as racquet organs or malleoli.

Like pseudo scorpions and harvestman, they lack book lungs, having instead a well-developed tracheal system that takes in air through three pairs of slits on the animal's underside. In some species there are very large central eyes that are capable of recognizing forms, and are used for hunting. Lateral eyes are only rudimentary, if present at all. Males are usually smaller than females, with longer legs. 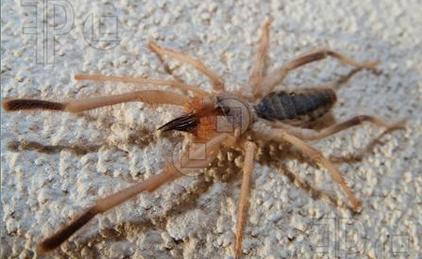