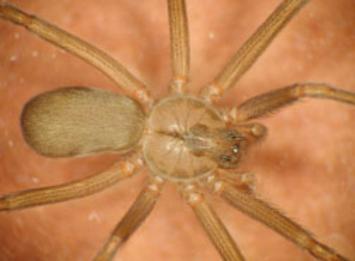 (Please understand. The Recluse is very rare in Colorado. Mostly shipped in. There are cases of infestations in CO. So they are here just very very rare.)

The brown recluse spider or violin spider, Loxosceles reclusa, is a well-known member of the family Sicariidae (formerly placed in a family "Loxoscelidae").

Brown recluse spiders are usually between 6–20 mm (1/4 in and 3/4 in), but may grow larger. While typically light to medium brown, they range in color from cream-colored to dark brown or blackish gray. The cephalothorax and abdomen may not necessarily be the same color. These spiders usually have markings on the dorsal side of their cephalothorax, with a black line coming from it that looks like a violin with the neck of the violin pointing to the rear of the spider, resulting in the nicknames fiddleback spider, brown fiddler or violin spider.

Since the violin pattern is not diagnostic, and other spiders may have similar markings (such as cellar spiders and pirate spiders), for more assurance in identification it is imperative to examine the eyes. Most spiders have eight eyes; recluse spiders have six eyes arranged in pairs (dyads) with one median pair and two lateral pairs. Only a few other spiders have three pairs of eyes arranged in this way (e.g., scytodids). Recluses have no obvious coloration patterns on the abdomen or legs, and the legs lack spines. The abdomen is covered with fine short hairs that (viewed without magnification) give it the appearance of soft fur. The leg joints may appear to be a slightly lighter color.

As suggested by its specific epithet reclusa ("recluse"), brown recluses are rarely aggressive, and actual bites from the species are rare. The spider usually bites only when pressed against the skin, such as when tangled up within clothes, towels, bedding, inside work gloves, etc. Many human victims of brown recluse bites report having been bitten after putting on clothes that had not recently been worn or lying undisturbed on the floor. The initial brown recluse bite frequently is not felt and may not be immediately painful, yet such a bite can be serious. However, the fangs of the brown recluse are so tiny they are unable to penetrate most fabric, including socks.