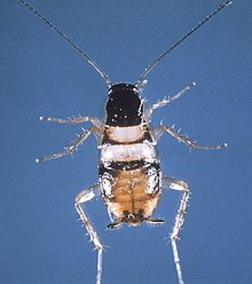 The brown-banded cockroach, Supella longipalpa, is a small species of cockroach, measuring about 5/8th in (10 to 14;mm) long. It is tan to light brown. It has two light-colored bands across the wings and abdomen, they may sometimes appear to be broken or irregular but are quite noticeable. The bands may be partly obscured by the wings. The male has wings that cover the abdomen, while the female has wings that do not cover the abdomen completely. The male appears more slender than the female, the female appears wider.

The brown-banded cockroach has a fairly wide distribution, being found in the northeastern, southern, and mid west regions of the United States quite commonly. They are one of the most recent alien cockroaches to form breeding colonies in Britain and Ireland. They need less moisture than the German cockroach so they tend to be more broadly distributed in the home, such as in living rooms and bedrooms. They can often be found in homes and apartments, but are less common in restaurants. They tend not to be found in the daytime, since they avoid light.

The brown-banded cockroach eats a wide variety of items. Cockroaches are usually scavengers, and thus can eat a wide array of items, often almost anything organic, including decaying matter. It has been known to cause problems in hospitals by emerging at night to feed on bodily fluids, thereby risking cross-infection.